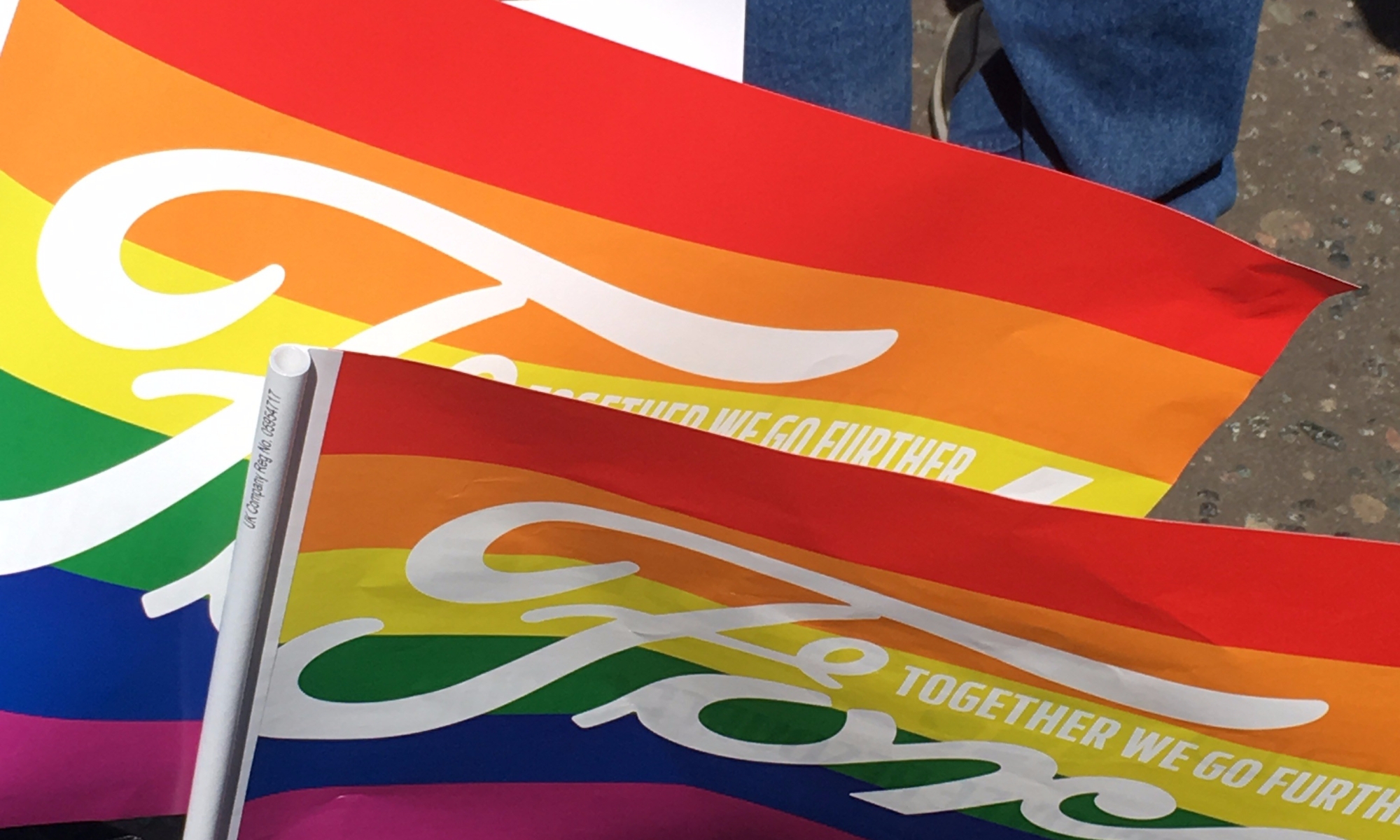 “Nice cans love!” A guy wearing a rainbow garland just walked past my friend who was holding her and her girlfriends’ can of beer, one in each hand out in front of her chest (the normal way to hold cans of beer).

“Woah… this is Brighton Pride you can’t be making comments like that.” Of course I wasn’t going to let this go. I stopped the guy in his tracks suddenly realising how much bigger he was than me.

“I’ll say what I like you fucking lesbian! Do you know who I am?” Erm no I didn’t know who he was and I didn’t really appreciate being called a fucking lesbian… even if it’s entirely true he said it in a tone that was far from congratulatory.

At this point I may have asked him what he was trying to prove and may have insinuated he must have a small penis he was trying to compensate for. I regret this but I had a few ciders in me and was kind of lost for words in this intimidating confrontation.

“I’ll say what I like you fucking lesbian” he repeated, and then came something I could never have anticipated: “I have made hundreds more women orgasm than you ever could, they’re absolutely soaking wet – they quiver under me!”

Oh my god, gross. What made it worse was the spitting anger in which he said it. Oh, and the rainbow garland still sitting round his neck – he was actually out celebrating Pride.

He stormed off and his girlfriend, also sporting a rainbow garland, came over to me and my friend to apologise – “he’s been doing this all day.” In exasperation, we said thank you for the apology but perhaps she needs to take him home, or at least to a different part of the city, not in the centre of Pride.

“Erm I don’t know what kind of weird things you guys do but I’m here to celebrate Pride!” Oh dear, here we go again. My friend kindly tried to explain that what she was saying was also homophobic. Unfortunately this didn’t go down too well, and she merely repeated the same sentiment until my friend’s girlfriend returned and dragged us away.

We were all left stunned. How had we got to the point where the routine homophobic abuse you get at pride comes from someone actually celebrating it? The only homophobia used to be from Christian choir groups or drunk onlookers, now it’s the people wearing rainbow garlands. In this blog I will describe how the depoliticization, and indeed homophobia, of this rainbow garland has come about directly as a result of the commercialisation of Brighton Pride.

A few years ago they started fencing off both the park and St James’ street party with tall wire fences, security guards, and an entrance fee. Most of us migrated to the Old Steine, where we could still sit in the sun after the march without the feeling that people were trying to make money out of our fight for equality. But it’s been getting worse. This year, even the Old Steine was ringfenced. You were allowed in for free but only if you passed a checkpoint and spent money in the expensive establishments inside. The protest for gay rights has gradually been tamed, renamed, and literally contained.  The poppy-patterned cloth protecting the war memorial made clear where this protest should exist, and where it shouldn’t; because I’m sure there were never any gay soldiers. 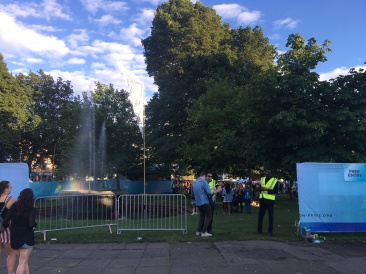 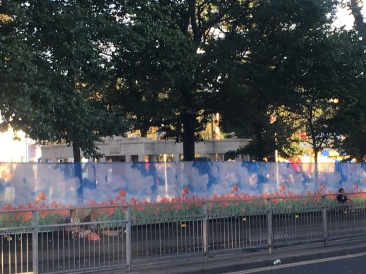 Not only has our protest gradually been contained, but it has been rebranded as a festival; a capitalist enterprise for everyone and anyone, whether you support gay rights or not. The march is now a parade. And fewer are the gay rights and HIV charities, the schools campaigning against bullying, and the uplifting floats such as “the only gay bar in Crawley”. Much greater are the floats co-advertising their brands: Tesco, Virgin Holidays, Ford motor cars, Enterprise car share, Roche pharmaceuticals, American Express, Nandos, and EDF energy. My friends argued that maybe they’re just trying to show their employees and users of their services that they are accepting of LGBT rights. But take, for instance, 02, who painted a whole bus which I’m sure they tour round the country throughout summer; there is no mention of gay rights anywhere on their design. 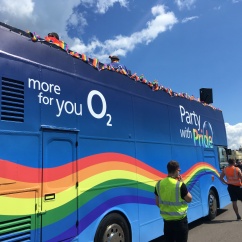 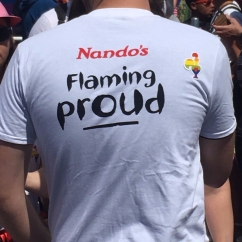 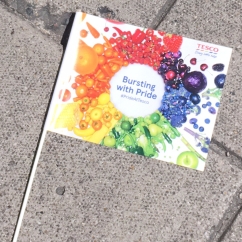 The shop fronts also take advantage of the day. Take a walk through town which is thriving with hungry customers: Wagamama have a specially made rainbow sign for the weekend; GAP have a dancer in the window and a DJ in store; even Sainsbury’s have joined in. But notice that, once again, none of these companies talk about gay rights. They use the euphemistic symbolism of the rainbow flag and talk about “bursting with pride”. If it’s not about gay rights, what are these companies so rainbow-proud of?

The use of the rainbow flag in this way, without mention of gay rights, has brought it into a depoliticised space. The covering of the rainbow flag with Ford, Tesco, and Virgin Holidays has begun to rebrand the rainbow; it is to say that these companies are part of modernity, they are part of the party, and accepting of everyone. It has become a flag of celebration rather than protest. But having this lack of discrimination really does welcome everyone and everything; including the rainbow-proud garland-wearing homophobic festival attendees we met that evening.

In the same way as Tel Aviv Pride has been pinkwashed with Israeli nationalism and anti-Palestine campaigns (Milani & Levon, 2016), Brighton Pride has been pinkwashed with capitalist sentiments and an opportunity for businesses to make money. In doing so they have taken away the meaning of the day, and worked to increase demand through advertising campaigns reminiscent of music festivals. Indeed the website’s Google tagline is “Brighton Pride – the UK’s biggest Pride festival”, and the main focus is the entertainment lined up for the day.

The homocapitalism of Brighton Pride is more than just an acceptance of corporate sponsorship. It is an invitation to (literally) contain the meaning of the campaign and to commodify the experience of being gay to one that is based solely on drinking, partying, and dressing up. In doing so it includes people who actively work against the original meaning of the campaign. Like when I questioned the guy wearing a homemade t-shirt: “I support your right to be gay but not up my arse”. On questioning he went on to tell me that he was “actually a lesbian too” so I could sleep with him. Wonderful. Equally worrying were the gay women I met two years ago who stated they wanted to go down to Dover and “shoot all the migrants”. Even the ones coming here because they would be killed or imprisoned for being gay in their own countries. In containing the meaning and practice of Pride they have opened the protest to just about anyone with any view on homosexuality. But in protesting you have to discriminate between what you think is right and what you think is wrong.

They said they had to start charging for tickets and asking businesses for sponsorship as the cost of the security was too much for the council to pay. But aren’t we forgetting something? Pride is meant to be a protest. It’s a protest against the bullying that still goes on in schools, the shouts we still get on the street, and the people who have been physically and mentally abused for their sexuality. Yes, people still get beaten up for being gay. It’s also to raise awareness that, yes, Brighton might be better than most places, but there are still so many places elsewhere in the UK, across the rest of the world, and indeed on the outskirts of Brighton where we don’t feel safe holding hands. Brighton (LGBT) Pride is supposed to disrupt, it’s supposed to make people notice, not be contained away.

We ended up bumping into another fight consisting of about three straight couples and realised we felt wholly uncomfortable. We went home, ordered pizza, and got high. And that was best part of my Brighton Pride.

38 Replies to “Homophobic rainbow garlands: the homocommercialism of Brighton Pride”